Hamilton Montana to Idaho Falls, Idaho today for the LAST tour concert of the 2018 season.  There have been days along the way that have felt as if we were a million miles from home & then today as the reality starts to set in that tomorrow we will be back in SLC, we are reminded how quickly times has gone by.  It has been 16 days since we left our home base & today we entered into more familiar terrain & for some a more familiar location.

Before leaving Hamilton, The Wesley Bell Ringers managed to squeeze in some fun starting with a group breakfast hosted by The Corvallis United Methodist Church in Corvallis, close to Hamilton.  Group breakfasts have been a common occurrence on this tour, but this is the first time the choir has played at one church & invited for breakfast at another!  The breakfast burritos were amazing & set the group up well for today's travel.

Salmon Idaho was the afternoon lunch & activity area.  The group took some time to explore the Sacajawea interpretive center, after waiting patiently on the bus for a bride & groom to say "I do" before getting off the bus.  Can you only imagine a large passenger bus pulling up to a stop right before this moment?

Two Wesley Bell Ringer traditions took place today.  The Wesley Bell Ringers took the time to reflect on this year & cast their individual vote for the Marsha Villvan award.  The Marsha Villlvan award is given each year to the ringer (in any age range or year of playing) who demonstrated continuous support to the choir & to ensuring that the traditions & the culture of The Wesley Bell Ringers continue on for future generations of the choir.  The second tradition that was taken care of today was the senior lunch.  This lunch is a chance for the seniors & super senior to have a special lunch as a thank you for all the amazing music over the years.  Once the seniors & super seniors left for their lunch the remaining 4 ringers who are currently not seniors got a glimpse of what next year will look like as the choir welcomes in new ringers.

From Salmon to Idaho Falls it was a smooth & flat drive.  Perfect for napping.  Some napped harder than others (see photos below) trying to soak in all that good nap time before leaving the comfort of the bus tomorrow.

Tonight's concert was held at the impressive Trinity United Methodist Church in Idaho Falls, Idaho.  Every church The Wesley Bell Ringers played at this tour was incredible & tonight's church did not disappoint.  The Trinity United Methodist Church was built back in the early 1900's & incredibly beautiful.  For the last Wesley Bell Ringer concert, the crowd also did not disappoint.  They were incredible receptive to the concert & provide the Wesley's all the energy they needed to play an amazing show.  We can't wait to get home tomorrow night to show you how they have taken what was an already incredibly concert into one that is spectacular. 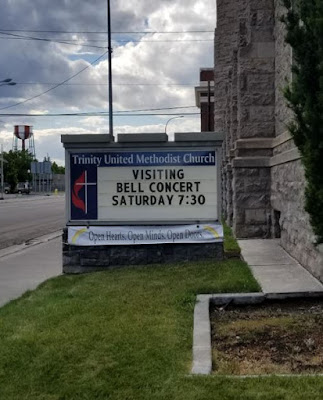