Day 13 - Abilene Texas to Lubbock Texas -  KAYAK DAY!  Who would have thought that the most amazing kayak & stand up paddle board adventure would be in TEXAS?!?! Thanks to Gina, The Wesley Bell Ringers spent the morning at SUP Abilene (If you know anyone near or in Abilene Texas, please tell them about this gem)  The owners came in early so that the ringers could get as much time on the water as possible.


The kayak location also doubled as the traditional picnic location. With a large number of new ringers on this tour, time has been taken to explain the "why" behind the traditions & things that are done on tour such as the needlepoint created by Ed, tour manuals, and the picnic day.  The reason for the picnic is simply because it is something the choir started a while back & it has just continued.  Nonetheless, it is special & the kids loved it.

Two and a half hours from Abilene to Lubbock, just enough time for a nap by almost everyone & a quick pit stop to a place called HAPPY which made shaved ice, smoothies, and frozen lemonades with tea bubbles!  If only there was a HAPPY in SLC.


Tonight's concert in Lubbock Texas is a return event.  The Wesley Bell Ringers played at this same church 4 years ago on the 50th anniversary tour.  The congregation was excited to have us back and yet again, St Luke's has a bell choir.   Thanks to Laurie McCabe who was our contact in Lubbock, aunt to former ringer Larni Emery. 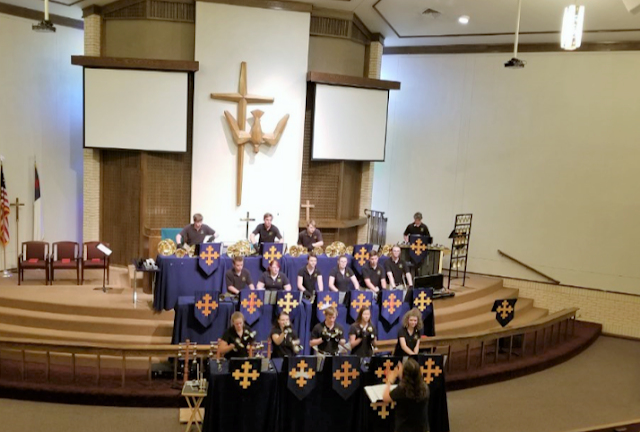 
Something very special happened at the concert in Lubbock Texas.  Pastor Jon & support brought 12 youth from First UMC in Denver City Texas to Lubbock to see The Wesley Bell Ringers perform.  Denver City Texas is more than 100 miles away from the concert venue & this group took the drive in the heat to be part of tonight's concert.  First UMC in Denver City has an adult bell choir, The Glory Ringers & hopefully have been inspired by The Wesley Bell Ringers to take a page from Ed's book & start a youth choir.