Lucky 13 – A travel day with an important stop. Lawrence to Denver

Day 13 - Today was Alicia G's birthday and she came on the bus to find the birthday fairies had decorated her bus seat, and the choir treated her to a rousing rendition of Happy Birthday to You.

Just an hour out of Lawrence we stopped off at the little town of Wamego.  The Wamego City Cemetery is the resting place of Marsha Vilven, one of the original 9 Wesley’s.  Marsha passed away shortly after graduating from the choir, and funds donated to her memorial we used to purchase a special set of bells.  For many years there were two distinct choirs, the Wesleys, and the Marsha Vilven Memorial Choir.  Later they merged into one, and the Marsha Vilven award was created out of respect to Marsha, who was a hard working and important original choir member.

This is the most important recognition the choir gives, going to the single ringer who did the most this year for the choir, as voted on by the members of the choir.

Following a short devotional by Ed, the story of the dragonfly in the stars, and a prayer by Katie, the choir voted for this year’s Marsha Vilven award by Marsha’s graveside.  It is a secret ballot and the award will be announced at the home concert.  It was a special moment and memorial for the choir.

Seven hours of drive time later we arrived in Denver in time for the kids to be cut loose for dinner on 16th street.  Swimming in the hotel pool followed, and we wrapped up our longest travel day of the trip. 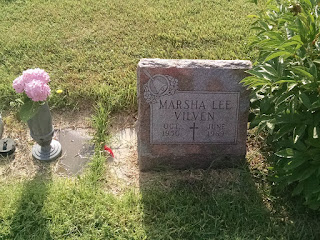 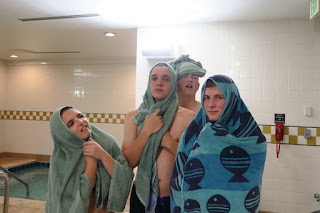